Estonia or Bust! -Johnny talks about his first trip beyond US borders

My interest in The U.S. A-Team was sparked in the summer of 2010 while sitting on a tailgate after a day of racing in Haverhill Ma. While talking to a group of racers I was captivated by U.S. A-Team Captain Billy Allen’s stories of racing in foreign lands. He must have sensed my enthusiasm because a couple of months later he called and asked me if I would like to be the U.S. A- Team Crew Chief for the 2011 trip to The World Championship in Estonia. I was in shock at the invitation and somehow managed to answer “yes.”  I told my parents and, knowing Billy and most of his team, they were very supportive of the idea. I immediately started the process. My first job would be to get a passport.

In February my parents and I traveled to Quincy Ma. for my first team meeting and also to attend the Rock and Blues Jam Fundraiser Party which the team hosts every year to raise funds for the their overseas racing trips. At the team meeting prior to the party I was astounded by the team’s organization and attention to every detail.  Billy laid out the plans for the trip and handed out the assignments to the different members. To my relief Rachel Warnock, the team’s Executive Administrator, was given most of the work. Billy then gave a brief overview of the program and stressed the importance of sportsmanship and reminded us that as representatives of The United States and APBA, our behavior was to be beyond reproach.

As we got ready for the party Billy handed me a team dress shirt and I realized “Wow, this is really happening.” The party was a success and I was feeling like I was a part of something very special as I greeted people at the door, introducing myself as the crew chief and later posing for pictures with the rest of the team.

It felt as though July would never come, but eventually the day arrived when my family drove me up to Boston where I met up with Billy, Rachel Warnock, Bob Cronin, Racer Allen and Tony Lombardo at Logan Airport. It was a long flight to Estonia including a three hour stopover at Schiphol Airport in Holland. This was my first time in a foreign country and I spent the layover walking around the airport taking in all of he different languages, dress, and cultures.  This was a definite eye opener for an eighteen year old kid from the woods of New Jersey.

Pulling into Viljandi was like watching an old World War Two movie. It was very old with cobblestone streets and a castle dating back to the 9th century. The sun rises at 4 am and sets at 1am making the days very long. There are people walking around town at 10 at night just like it was 10 in the morning.

We soon found the race site. I met local Estonian drivers Algo Kuss and Erko Abrahams who were testing their OSY-400’s for the weekend along with former World Champion and race organizer Tomas Mets. We also saw many of the other European drivers and crews who were very happy to see the Americans. It was obvious by the foreign teams’ excitement that the Americans had made many friends in just a couple of short years racing in Europe.

We had trouble getting our container cleared through Estonian Customs.  It took two days, many phone calls and a lot of patience along with much help from our Estonian boat racing friends.  Finally Friday came and our boats were delivered to the pits. We unpacked as quickly as possible and started rigging the boats. The UIM Race Officials pushed back the OSY testing time which was very helpful to us and allowed Billy and Tony some time to get familiar with the race course.

After testing ended it was time for the opening ceremonies.  As it was my first time at a UIM Championship, Billy elected me to be the Flag Bearer.  Standing there on the podium with representatives from fifteen different countries with Old Glory draped over my shoulders was the greatest feeling in the world. Our team received a great ovation when we were announced and it was obvious that everyone was very appreciative of us traveling so far for the race. The announcer even stated that having the United States team in attendance was what made the difference between a European Championship and a true World Championship.

Now it was Saturday and time to race. After time trials Billy ended up qualifying in the third spot and Tony was sixteenth out of the twenty-two finalists. My job as crew chief was to give both rigs a complete once over after the time trials. I made sure that every nut and bolt was tightened, that the engines were fueled and that the props were tight. On the jetty I would be pulling the starting rope for #92 Tony Lombardo and Rachel Warnock would be the holder.

As we got ready for the race the spectators jammed the grandstand area and I could feel the tension starting to build as the boats lined up on the jetty for heat one. The two minute warm up period ended and you could hear a pin drop as all eyes were on the red light which, when expired, would signal the start of the first heat. My pulse quickened, I felt like I was gonna puke and I could hear my own heartbeat in my ears as we waited for the red light to go out. Just as I thought I would die from the anticipation the red light went out and I pulled that rope as hard as I could- Tony was off!  It was a crazy sight as all twenty-two boats dove into the first turn and miraculously came out the other side. On the first lap a Polish driver blew it over hard bringing out the red flag and sending all the boats back to the jetty for the restart. We filled the boats up with gas and got ready to do it all again. Now I wasn’t as nervous. The light went out, I ripped the rope and Tony was once again headed to the first turn. Now I was really getting the hang of it.

When it was all over Tony had finished in fourteenth and Billy finished in a very respectable sixth but it was local Estonian hero Sten Kalder who brought home the Gold.

At the closing ceremonies, while standing among drivers and crews from all the different countries, the announcer called the entire United States team up to the podium and thanked us for traveling so far to compete at their race. The crowd went crazy whistling and clapping for us.  Surprised by the uproar, all I could to was stand there with a big smile on my face.

There were many things that I learned while on this trip. The UIM is all about safety. The boats used in Europe are safer than those raced in the U.S.  It is recommended to have reinforced cockpits in the APBA but it is mandatory in Europe. The red flags is flown stopping a heat if any driver goes into the water. Other differences I noticed were that the inspection area is closed to all but the driver and a mechanic. There is not a crowd standing around watching the inspection process. The pits were fenced in with security guards checking wristbands on all drivers and crews it was closed to all after 10 p.m.  There was also a separate smoking area as smoking was strictly prohibited in the pits.  There were grandstand type bleachers for the spectators, hundreds of people and TV crews were lined up along the shores.  There were sponsors for each class and there were only three classes racing which made for a relatively quick day.

It was great to see that boat racing is alive and well all over the world. I made friends with all kinds of people from many different countries that I am now in touch with on a regular basis. It was an amazing experience which showed me, among many other things, that it is important to have The United States represented at The World Championship.

It is a week that I will never forget. This trip would not have been possible for me without the help of my parents, The A-Team, and all of their sponsors- without whom this program would not even exist. 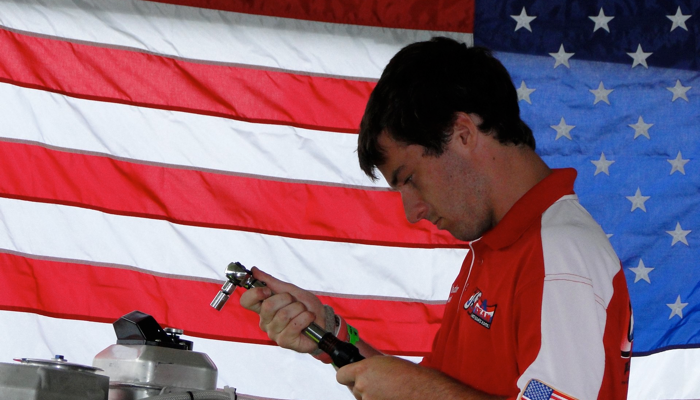